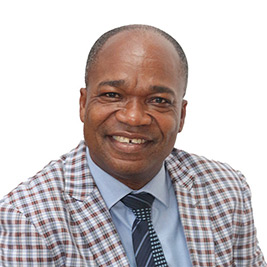 Apostle Moses Boahen, first Deputy Chairman of CPIC, is an astute Administrator and businessman, whose inclusion in the National Administration has been described as strategic and timely.

For, he will bring to bear his rich business acumen and vast experience in the field of business to help administer the church by propelling it to grow faster in both souls and finances.  He is 52 and hails from Chiraa, Brong Ahafo Region.

Apostle Moses, as he is affectionately called, is a graduate from the University of Ghana, Legon and holds a Bachelor’s degree in Political Science with Linguistics. He obtained his ‘O’ and ‘A’ level certificates from Bechem Presbyterian (1979-84) and Acherensua (1986-87) Senior Secondary Schools respectively.

After graduating from Legon in 1991, he went to work as a tutor in Dormaa Sec. School from 1992 to 1994 before deciding to establish his own school at Chiraa, his home town. Today, not only has the school had an astronomical growth from a small nursery to a senior high school, but has expanded to other major towns in Brong Ahafo.

Apostle Moses, while expanding his horizon in school business, has had an eye on the financial sector, too. He has entered into the Savings and Loans business and now operates other businesses including a Micro-finance company, which has a string branches. He is the CEO of Emmanuel Group of Companies (branches at Dormaa Ahenkro, Chiraa, Nkoranza, Asikasu No.1).

As a Christian, the young Moses endeared himself to the things of GOD with an unmatched zeal and never missed any church activity. He served in all capacities in his both local and district levels. He rose through ranks to become the local Elder for many years.

His stewardship, diligence, dedication and loyalty caught the attention of the former general secretary of CACI, Apostle Dr. Annor-Yeboah, who appointed him as Regional Deacon, a position he held until CPIC was formed in 2003. His long association with this great man of God so impacted his spiritual life that people see him as a true semblance of the departed Bishop.

He was then ordained as a full Reverend Minister in charge of Brong Ahafo Region ‘D’ with Chiraa as headquarters. He was later consecrated an Apostle by the Founder and Presiding Bishop of CPIC, Prof. Annor-Yeboah of blessed memory.

He is the resident Pastor of Tema Community 4 Branch. He is a devoted husband to Lady Comfort Boahen, and a loving father of five children.